“I won’t say another word about the beauties of the city and its situation, which have been described and praised often. As they say here, ” Vedi Napoli e poi muori! See Naples and die !” One can’t blame the Neapolitan for never wanting to leave his city, nor its poets singing its praises in lofty hyperboles: it would be wonderful even if a few more Vesuviuses were to rise in the neighborhood”.
Johann Wolfgang von Goethe

When I come to reflect on the subject, in no country have I received such honors or been so esteemed as in Italy, and nothing contributes more to a man’s fame than to have written Italian operas, and especially for Naples.
Wolfgang Amadeus Mozart

It is not important where you are in Naples but you can see and feel the Vesuvio everywhere. Sometimes she shows that he is still there. But most of the time he sleeps. There are many fruits and vegetables that only grow there and nowhere else. It something special in having the Vesuvio right in the city.

“Naples is not a City. It’s a world”.
Marco Masini

You will never find a place where you can eat a better pizza then in Naples. It is not how they do it (or maybe yes) but it is something that comes together with all the ingredients. Maybe its the water maybe the location. Whatever it is. If you try once in your life a Pizza in Naples you will never like anything like that anymore. Besides the Pizza there are lot’s of amazing things you can taste only in Naples. Not even in other cities.

“One day I will return to Naples, to my hometown I love. But I not for singing only to eat Pizza.”
Enrico Caruso

Just a few days ago Dolce & Gabbana presented their new Alta Mode Collection not in Paris, Milan or Florence. No, right in the center of Napoli. The both designers said that they found Naples as the most glamorous city in Italy. Naples always had a lot of tailors. And they still have. For example “Marinella”, that has this shop now in third generation. His granddad tailored for rich people all over the world and politicians. And they still are doing this kind of work. They do special tailor-made fashion for Clinton, Obama and even for some German and Spanish Elite. But there are also labels like Kiton and Harmont & Blaine that are known everywhere. Jacky O loved to shop in Capri.

“We are here because here live the best people with amazing hearts.”
Dolce & Gabbana

Craftsmanship is a big thing in Naples. Besides the fashion Napoli is also very known for “presepe” the crip. This kind of culture goes back to the year 1013. They build the dolls with all their clothes with amazing scenes. And they still do. You will be stunned if you look into the faces of this very small dolls and find expressions you would never expect. Usually they are all exhibits in the churches during the christmas time but there is also a street. San Gregorio Armeno in Spaccanapoli has all that the whole year around.

“The Neapolitan can extract the art out of the sun.”
Camillo Boito

”Naples is a Paradise: everyone lives in a state of intoxicated self-forgetfulness, myself included. I seem to be a completely different person whom I hardly recognize. Yesterday I thought to myself: either you were mad before, or you are mad now …”
Johann Wolfgang Goethe

Oh wow here you will find legends and stories on every corner. You can ask everyone and everyone will tell you something. Just a few legends: in the basement of Castel dell’ Ovo there is an egg. If you find it, the Castel dell’ Ovo will fall together. Another well know Legend is about the chili pepper. You will see them everywhere in Naples. It stays for the symbol of life. If you have this nothing bad can come to you. But you can’t buy it by yourself. Someone has to give you this. And it has to be handmade.

“Superstition is to religion what astrology is to astronomy: the mad daughter of a wise mother.”
Voltaire

Jacqueline Kennedy Onassis felt in love with Capri. Hemingway invented the Capri Pants. You will love the Limoncello, an alcolic juice of Lemons from the bay coast that will be served after lunch. You have to visit all the hidden caverns on the Islands (not the touristic ones). And you will feel like a star driving with an oldtimer car the serpentine of Amalfi or Positano.

The culture, the art, the love and the passion. Who wants to know Naples has to live it. Or you love it or you hate it. I think there is nothing in between. You will not find anyone who says: “Naples, let me think”. Everyone has his mind clear when in comes to Naples. Like Pulcinella. It is so much Naples. This funny figure with the birds mask. With fun and very humanistic he says everything what happened during the day. If you like it or not. He is a Rebel. 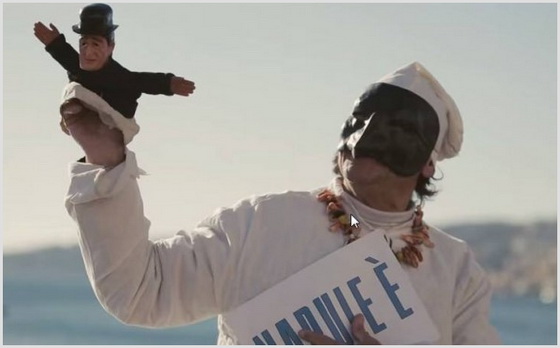 Naples has the most beautiful underground railway stations in Europe.

Did you know that Naples was the only city in the world that forced out the German occupiers in 4 days. Between 27 and 30 September 1943. They had enough from all the executions from the Germans that all (even kids) armed themselves to fight against the german army. These revolts prevent the german from turning the city into ruins (as Adolf Hitler had ordered). The german troops tried to make Naples as their place to fight against the allied but they didn’t count on the resistance of the people. I think that says a lot about Naples. They are kind of rebels. But people in Naples are also kind of survival artists. Maybe the city is not the richest in the country but you will feel like paradise almost everywhere you go. You will hear people singing, sitting outside and discussing. But most of all – enjoying life. Not so common nowadays anymore. Here there is another clock ticking. People in Naples are very friendly and open hearted. They are born with the sun in their hearts.

“I’m not an Italian. I’m a Neapolitan. That’s something different.”
Sophia Loren