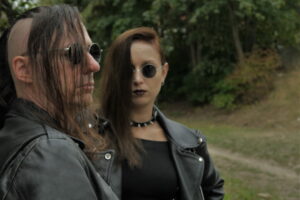 This German power-duo strikes for the second time with a new and explosive arsenal of technological sounds, launching their album “Zombified” into orbit, two years after the great full-length debut “Taste Me!” published in 2018. Apocalyptic visions of a present and future time, populations reduced to masses psychologically emptied of their will, a desolate, repressed, hopeless human society, are the images evoked by the music of this project that knows how to express without compromise all its personality, capable of transforming the sonorities into strong messages, as specular metaphor of current reality. The fourteen tracks of “Zombified” are the perfect fusion between restless Dark Electro melodies and angry Retro-EBM formulations, the result of which demonstrates the great compositional ability and the remarkable inspirational charge of Deadly Injection. Catchy electronic elaborations will completely overwhelm you from the very first moment of the tracklist, whose prerogatives are harshly violent vocals, danceable and syncopated sections of drumming mainly midtempo uptempo, sequenced harmonies and cold streams of synths: all this create in hearing sharp, incendiary sonic trajectories, while in your mind it creates nightmares and catastrophic urban scenarios from which it is impossible to escape. A spectacular, intriguing and powerful release, destined to become a milestone in its genre. The collective zombification process has its soundtrack from today.

By continuing to use the site, you agree to the use of cookies. More information